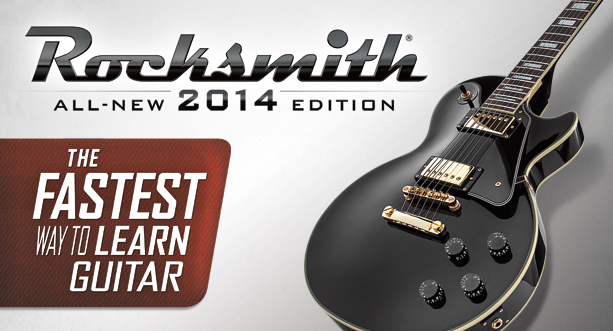 So I finally get the chance to write the review for the one game I been waiting all year for, Rocksmith 2014. Cool thing is there are no spoilers to be written as this game has ZERO story.

Now for those unfamiliar to this game, it is essentially Guitar Hero on steroids, because instead of a plastic toy guitar, you plug into a real guitar or bass guitar. Both of which I posses a few of.

However this game is not exactly a game as such either, as it is more of a tutorial, that monitors how you play the notes, your accuracy, your strumming, everything. As to make you a better musician. It starts off as if you have never played an instrument and adjusts accordingly to your skills or lack there of.

Straight off the bat there are options such as Learn a song, Techniques, Practice, and so on and so forth. Being a musician of over 10 years (as a bassist and sometimes guitarist), I appreciated the fact that I didn’t have to play an easy 3 chord song perfectly to unlock more technical songs like Iron Maiden’s The Trooper, and could straight away choose it 1st if I wanted to….and in fact 1st song played was The Trooper! Things like that make this game an absolute gem for those wanting who are musicians of some years experience or a complete beginner not know a guitar pick from a whammy bar.

I was playing Don’t Look back in Anger from Oasis on this game and I was doing pretty well opening up more of the chords as I went along. Because in this game the notes come down the screen in a similar manner to Guitar Hero but at 1st it’ll show you just one note out off the full chord you need to play, almost as if to familiarize the player with where on the neck your hand must be for that particular part, and the more accurate you are the more of the chords come down etc. So I was nailing the little they were giving me and earning more etc, until playing the song a second time. The thorn in my side returned, the open C chord! As a bassist my whole musical career, I’ve never needed to worry about open chords as much as guitarists, and being a bassist helped my guitar playing, however I could always play all the barre chords, and the open chords too, except open C has always screwed me over! And that curse returned for this song, as its key is essential
in C….so as the chorus hits and I missed a few C chords it started taking away my hard-earned notes and I thought Open C you’re an asshole! But it is all good as it will make me a better guitarist so I forgive it.

Moving on to bass, I later plugged in my bass, to see what options I’d get as a bassist, and all the same options were there. Learn a song, Techniques, etc,  only thing I think would have been awesome is if they asked whether or not you were playing on a 4 string or a 5 string bass. Because that could work pretty well for me as I play a 5 string bass. Reason being the one thing bass players hate is changing their tuning from standard E, A, D, G to other tunings like dropped D making it D, A, D, G. Where as on a 5 string bass your standard tuning is B, E, A, D, G. Making the 3rd fret on your low B string the same note you’d have your open dropped D note….which is one of the many reasons I play the 5 string over the 4 string. So when going into a song like My Own Summer from the Deftones – a song that my band used to cover frequently – it takes me to the guitar/bass tuner which is awesome by the way and asks me to tune all my strings, down to the tuning you would need to play that song as a 4 string bass where as you can play it perfectly in standard, as a 5 string bass player.

Don’t let that one little issue I have change the overall opinion I have though. All in all this is an AMAZING way to become a better musician and learn many songs and I look forward to all the extra song packs out already as DLC. I suggest this game to anyone who wants to learn guitar and or bass. Rock on, and Up the Irons!!